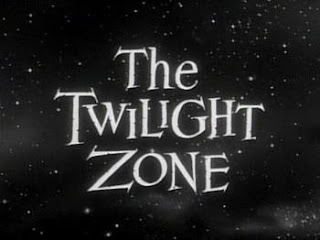 Every year on New Years' Eve, the Syfy Channel(formerly known as the Sci-Fi Channel) holds a marathon of episodes of the ground-breaking Twilight Zone series. 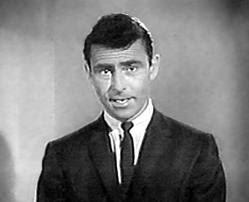 The Twilight Zone, created by Rod Serling, ran for 5 years from 1959 to 1964. The series was of extremely good quality for the time, and it was a great step forward for science fiction. The stories are fascinating, and the characters are engaging. I was first introduced to The Twilight Zone through hearing the radio series, which started to rewrite Serling's stories for the airwaves in 2002. But Stacy Keach, the announcer for the radio series, could never outdo Rod Serling.

I don't know what it is about his demeanor or his voice, but it is so perfect for this show. Both for the creepy stories and the humorous ones, his comments are perfect in tone and execution. Yeah, I'm a fangirl.

Over the years I've caught a few episodes, listened to a few radio plays, and pulled a few twists out of pop culture through osmosis, but this is the first year I've committed myself to watching as many of the episodes of the marathon as I can. I'm surprised at how many twists and details I can predict fore episodes I've never seen - this show is truly ingrained into American pop culture. I remember humming the theme song before I knew what The Twilight Zone even was!

My favorites are always the spooky, creepy ones. Especially "It's A Good Life." It is the one where the town of Peaksville is held in the grip of a six-year-old-boy who can control things with his thoughts. It is so creepy how everyone has no choice but to complement and encourage the boy. "Everybody loves you, Anthony. You know that. You're everybody's favorite. That's a real good thing you did, Anthony. A real fine thing." eeek.

Yup, chills up my spine. I love these creepy stories, and they stand the test of time extremely well. The issues and concepts explored with these stories are broad enough for all times, and the fashions and little idiosyncrasies from the 1960's are easy to ignore or cherish, depending on how you view them. For example, the ways that women are treated. Sometimes they are treated with gallantry and respect, and sometimes they are dismissed as annoying. But these kinds of things never take center stage of the story, and instead there are interesting and intriguing concepts to explore instead.

"You are about to enter another dimension. A dimension not only of sight and sound, but of mind. A journey into a wondrous land of imagination. Next stop, the Twilight Zone! " -Narrator
at 5:14 PM No comments:

The Field Museum: A Primer

The Field Museum of Natural History. Where can I start?

To fellow natives of Chicago and the surrounding towns, I think you understand this. How can I sum up the greatest Natural History (and more) Museum in the world? Yes, the best. But I'll get to that later.

The "Columbian Museum of Chicago" was founded in 1891 as part of the World's Columbian Exposition (a fascinating event in its own right), but the name was changed to the Field Museum in 1905. It moved to its current location on the lakeshore in 1921, in the new building mostly paid for by the Field family (of Marshall Field fame).

The grandeur of the building itself deserves its own posts, but it is also invaluable in its diverse variety of subjects covered, presentation of information, and the sheer value of everything it owns.

Growing up around Chicago, most elementary kids go to the Field museum at least once every two years, and usually to see different exhibits. Field trips are fun on their own, but I always treasured field trips to the Field the most. Especially as a juvenile dinosaur nut, it was great to see Sue in all of her glory upon walking into the main hall. In fact, I think that the late "Life over Time" directly influenced me to pursue a career in geology.

One of the great traits of the Field Museum is just its immense size. I've been going there for years, and I still suspect that there are exhibits deep in the halls that I've never seen. I walked around those marble halls for hours today and I know that there are still things that I am missing. However, there is more to the Field than that. One great thing about size is that you never feel cramped or crushed. The huge size lets exhibits breathe, and when you really need to take a break, the main hall is the best place to go. Sunlight streams in through the roof, illuminating everything.

But another great part about the Field is the diversity. There are dinosaurs, Native Americans, Egyptian mummies, and world animals that are all presented with insane attention to detail. There are other exhibits about Africa, soil, Maori culture, Tibet, not to mention rotating exhibits of relevant topics, like Climate Change, the history of Gold, and Mythical Creatures.

I also love how they have a Fossil Prep lab with big windows, so kids can see what paleontologists do to remove the bones from the rock. It really gives you an appreciation for what scientists do to discover and preserve artifacts and bones.

I have visited both the Smithsonian's Natural History Museum and the American Museum of Natural History, and I am still proud to say that my hometown museum is the greatest place to spend the day. The taxidermy collections are easily as extensive as the Smithsonian's, and navigating the Field isn't as tricky, creepy or dangerous as the AMNH. All natural history museums have their pros and cons, but I would still choose the Field Museum as a place to explore and learn.
at 10:09 PM 1 comment:

Finding Other Earths: A Lecture by Dr. Jason Steffen

Tonight at Augustana a physicist by the name of Dr. Jason Steffen came to talk to us about the Kepler mission. The mission sent the Kepler spacecraft into an orbit around the sun (not the earth) to take looks at a particular part of space in the search for other earths.

The Kepler telescope is highly sensitive and state-of-the-art. It was only sent up in space in March of 2009, and it has been sending back data ever since. What the Kepler looks for is small dots that move across other stars, or exoplanets. Kepler sends back what it thinks planets are, and we use telescopes and techniques down here to try and rule out false positives.

Dr. Steffen is a smart man, and though he might not have been the best choice for this audience, he got his points across. I personally appreciated his extra information about the math and physics and graphs he had, but many people were getting restless with the intricate explanations. 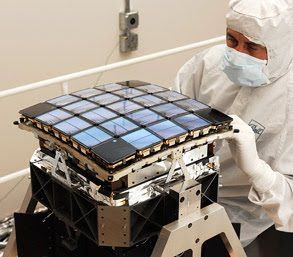 One thing that is interesting is how long the scientific community takes to interpret results. This lecture given to us by this scientist from FermiLab, which is always on the forefront of new discoveries, only covered information from the first few months to the first year of the mission. I think that it is good that the scientific community takes the time to think about the results before it is released to the public, though it does make me impatient.

Overall, this was a good lecture! I think I learned a lot about the mission and about its importance, but also about its relative difficulty. There is some tough computing being done by the Kepler, our computers and our physicists down here, and I'm glad that we have people working on it! Hopefully future advances will increase the speed with which we can look for earth-like planets. And someday maybe we can find a way to propel ourselves there!

Quick Trip to Chicago, and a Lesson in Architecture

Yesterday, my family went downtown to Chicago, a scant 22.5 miles from my home. We did it to support my mom, who was running a 1/2 marathon through the city. Since the race kicked off at 6:30 AM, we stayed overnight in a hotel. As we drove and walked through the city, I couldn't help but keep my gaze from drifting up to the wonderful buildings. Namely, the COLUMNS!

Namely, the Chicago Cultural Center, formerly the Chicago Public Library. There are these large pillars along every side of the building, up in between the square windows. It's a bit hard to make out in the picture, but they're there. I remember my World History, freshman year, where we learned the three different types of column. Do you know what they are?

The Dorian Column! The plainest of the three.

The Ionian/Ionic Column! This one features curly embellishments.

And finally, the Corinthian Column! This one is super fancy, and features skillfully carved leaves, fruit, and other decorations.


Which one is your favorite? I saw all three types in Chicago, and I must say that I am a fan of the Ionian columns the most.
at 3:23 PM No comments: